The business and standards are led by director Darren Vick, who has acquired complete ownership of Prasinus Energy Services. 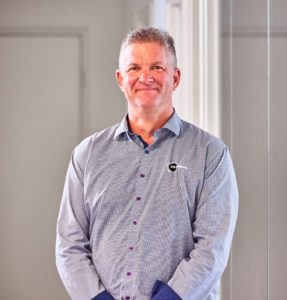 Darren is results orientated and hands-on professional with over 25-year experience in the Power Line Industry.

He has a verifiable track record in the successful planning, management and completion of a wide range of multi-million-dollar projects, from coordinating staff and subcontractors, to developing partnerships and positive rapport with clients, stakeholders, engineers, designers, surveyors and suppliers.

Alongside renewed ownership, Prasinus has restructured its team to better service you. We’re excited to announce Justin Mitchelmore’s promotion (again!) to the position of Delivery Manager. Justin completed his linework apprenticeship in 2010, before progressing into a supervisory role with us a few years later. By 2018, Justin had been promoted to the role of Construction Manager. Just a couple of years later, he became our Project Manager. Eleven years on, Justin is still with us, strengthening his skill set, his team, and our services. We are so grateful for the longevity of Justin’s commitment to us, and we endeavour to continue rewarding him as our business evolves. Shaun Matthews joined us in July of 2021 as our Safety, Health and Wellbeing Coordinator. Prior to joining, Shaun operated as the National Health, Safety and Compliance Manager for three companies under singular ownership. He has an extensive understanding of Operational Health and Safety strategy, compliance, systems, and solutions. Shaun’s role is essential to the care and safety of our team, particularly during the ever-changing landscape of the current economy. Shaun has already solidified the importance of his role, through the growing comfortability and strength of our team. We are excited to see the results of his work further down the line! Saeed Rezaee has joined us as an Electrical Services Estimator. Saeed is an energetic and driven individual who shares in the Prasinus values and mission. He is motivated by the new challenge within the Electrical Infrastructure and Distribution Department at Prasinus and eager to achieve success. He holds a degree in commerce and has vast experience estimating large-scale and commercial electrical projects. We are thrilled to have Saeed on board, applying his knowledge and experience to produce detailed estimates for our clients.

It’s been another huge couple of months for Prasinus and the team. We’ve taken on…

When a devastating storm hit Victoria, one unforgettable evening in June, Prasinus staff prepared to…

Prasinus are proud to announce that we have achieved certification for: • ISO 9001:2015 (Quality…

Thanks for visiting the Prasinus Energy web site! Please feel free to contact us with…