The project scope was to upgrade the existing 22kv supply, via an out of service Transmission line (Former YPS- RTS 132kV Line, Built in 1924) from tower 116 in Buln Buln travelling 45km to tower 200 in Tynong North. The O/H works also included installation of 3 HV Cable poles, 1 Sectionalisor including an Noja ACR and 1 standalone sectionalisor. This upgrade was required for the park to open 6 new waterslides ready for November 6th.

Prasinus engaged subcontractor Tim Co. to complete the transmission component which consisted of climbing all 85 towers between T116 and T200 to inspect the steelwork, insulators and conductor condition. Due to the age of the out of commission line some issues were identified and reported to Ausnet Services. Some minor defects where required to be rectified.

Prasinus installed feeder ID plates to all 85 towers, created floating strain arrangements at either end of the line joining to the newly installed Cable Head Poles.

Prasinus also installed an Auto Gas Switch at Garfield Nth Rd in early October, to provide a potential open point between the existing 22KV feeder and the New 22KV feeder.

Final connection and electrical testing occurred on the 22/10/19. Tying in the new feeder upgrading supply to the 6 new water slides, in time for testing of water stations and ride simulation for the November opening.

Well done to the Prasinus team for completing such a high-profile project while meeting the clients project milestones. 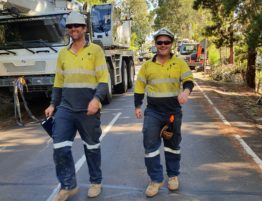